The Gloucestershire Old Spots hog breed is a relatively recent addition to the genetic resources of the USA. The breeding is closely monitored in the United Kingdom, so hogs here have good pedigrees that go back several generations. American breeders need to assure the same continuity, because breeding decisions need to be accurate in order to manage the genetic strength of the breed for future generations.

Originally the British used a circular/rotational breeding system where the male hogs move on to mate the females of the next group. This was their “color wheel” system, With enough breeding groups this system works fairly well to manage inbreeding, although it does have the peculiar consequence that eventually all hogs are related to one another at least to some degree. They usesfour groups (red, black, green, and blue) which is somewhat of a bare minimum of groups for this sort of system. The attraction of this system is that it is automatic, so breeders need to make fewer decisions. More recently, the British breeders have backed away from this system to encourage decisions directed at producing and using unrelated stock

A second strategy would be to pair hogs to always minimize the coefficient of inbreeding in the resulting litter. This strategy has the somewhat surprising outcome that eventually all hogs will be related to one another, and at that point no matings will result in a coefficient of zero. This approach also gets cumbersome over time, because as the upcoming generations get to be more and more related, finding that ideal mate becomes more and more difficult and limits options considerably.

Another strategy, and one I like, is to occasionally linebreed, or even inbreed, but this must be done cautiously and always with selected animals (strong, well-conformed, healthy). It is possible to alternate linebreeding with linecrossing every other generation. Hogs have the advantage of producing litters, and that gives breeders plenty of room for selection among littermates. This provides selection opportunities for each litter, so that matings do not necessarily need to be repeated again and again. This means that sows can be linebred for some matings, and linecrossed for other matings. With selection for vitality and growth the potential negative consequences should be minimal in most cases. The advantage of the linebred animals is that they can then be crossed out to other lines. The critical detail is to assure that unrelated lines are availabe for that linecrossing stage.

At the base of every strategy is to be selective. Not every hog born is a good candidate for being a breeding animal, and as along as people are selecting for vigor, conformation, and reproductive fitness the long-term should be good. Breeders should always breed to the Gloucestershire Old Spots standard. You can find it at www.britishpigs.org and scroll down to Gloucestershire Old Spots, where you can find the standard of excellence.

What is important is to maintain the possibility of unrelated hogs on down into the future. That usually means subdivision of the population somewhat, so that not all portions are mated
together routinely. This does not mean “never,” it just means that there is some degree of subdivision.
Some folks put great emphasis on “male lines” and “female lines” and it is important to remember that these refer to the “tail male” line or “tail female” line. What this means is that the animal goes back to a foundation boar through its male ancestors (so, sire, then grandsire, then great grandsire and so on), and similarly for the tail female line. All those animals in between end up being equally important, but there is no way to actually quantify them. 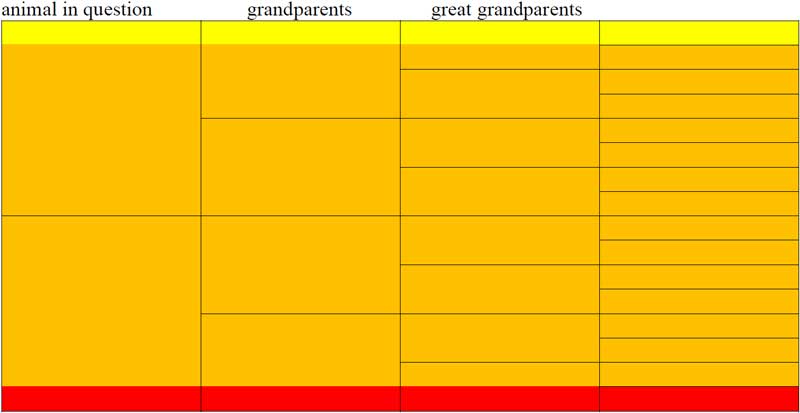 If it makes sense to subdivide the breed somewhat, I would first try to make sure that someone keeps the older USA lines going, without much or any of the recent UK influence. This recommendation is only for reproductively sound, healthy animals. These have a very important function for long-term crossing with the recent UK imports, but the problem is that if they are all crossed right now, then the distinctiveness quickly disappears and the USA lines can no longer perform this long-term function. They must be kept going, and kept available, for the long-term future vitality of the breed.

One suggestion is to maintain some “all USA” hogs, some “All UK” hogs, and then cross among them. Those crosses can then be taken back to USA or UK hogs as a moderate sort of linebreeding.
As a final note, “linebreeding” is when animals are mated that have ancestors in common. The most extreme is inbreeding, when parent is mated to child, or a sister to a brother (whether full or half). This level is extreme, but actually does make sense in some situations to rescue and concentrate influences in danger of disappearing. The important detail is that if the pigs produced by such close inbreeding are then crossed with an unrelated mate, the inbreeding coefficient goes back down to zero! The challenge is to maintain unrelated animals so that this is always possible, and such a strategy usually works for most breeds.

The “color wheel” and the “low CI” approaches have been used as criteria in the past, in the sense of absolute rules. Now that we have access to imported GOS pigs as well as semen, these approaches should now be regarded more as guidelines towards a comprehensive breeding plan with future modifications added as the need arises.
Above all, keep good records. All mating and farrowing information should be kept neatly and accurately, should be retrievable, and should also be clear enough that someone other than you can put the information back together and link to specific hogs.

And remember that these recommendations should be taken as a whole picture. Across the entire breed it is important to have breeders keeping an eye out for each of the different pieces so that the breed remains strong and productive.